Vilhelm Moberg’s novels are based on Andrew Peterson’s diaries

Shortly after arriving in Minnesota he came in contact with Andrew Peterson’s diaries.
In a letter from Minneapolis the 7 of July 1948 to his friend Edgar Swensson he is very excited after having discovered Andrews diaries, and he writes, (translated from Swedish):
“ I  have found just the material I need for my work. A diary kept by a Swedish farmer in Minnesota during 44 years. It is an incredible find.

I went to Waconia in Carver County, 30 miles from here, and there I heard about an old farmer who had been keeping a diary all his life in America until the day before he died.

I discovered that the diary was to be found in the Minnesota Historical Society Library in S:t Paul. Eventually the librarian hunted up 10 complete volumes, around 4000 handwritten large pages. What about that? I could hardly belive my eyes. 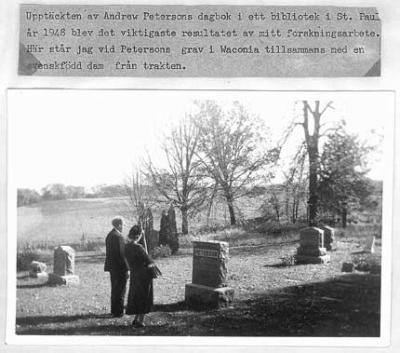 Vilhelm Moberg in front of Andrew Petersons familygrave, and Mobergs own words concerning his research before writing his emigrantnovels above the photo translated: ”The discovery of Andrew Petersons diary in a library in Saint Paul 1948 was the most important result of my research. Here I am standing at Petersons grave with a Swedish born lady from the neighborhood”In Sweden we have nothing equivalent to this diary kept by a farmer.

Much more in Swedish can be read in this letter about Mobergs happiness over having “discovered” Andrew’s diaries. The letter is published in Vilhelm Moberg Society’s book: ”Om gud vill och hälsan varar”, (printed 2007).

In his book ’The unknown family” (Bonniers, 1950) Moberg describes how he visited the Minnesota Historical Library in St Paul. When Moberg asked for material about Minnesota’s Swedish immigrants, the librarian gave him three volumes of the Peterson diaries. Moberg immediately realized the importance of what he had found, which he also mentions in ’The unknown family’, where he writes: ”This huge diary seems to be of priceless value to our knowledge of the first Swedish settlement in the Midwest.” 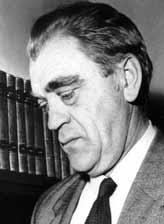 In the April 1966 issue of the Swedish Pioneer Moberg wrote an article about his emigrant novels, where he says: ”In the historical library of St. Paul~ I made my most important discovery.” And he continues:
”In the work of  Andrew Peterson I had discovered what I was looking for in America.

For several months I was sitting in the library of St. Paul to read about this Swedish farmer, to know what he had done, to know what he thought of life in this world. I read about his wife, his nine children, his cattle and his crops, his churchlife. When I finished to read the diary I had all the information I could use about a farmer’s life in the first Swedish settlements in Minnesota.”

There are hundreds of similarities in Andrews life and surroundings compared with Mobergs Emigrant–novel’s. Many can be found in Professor Roger Mc Knights Thesis:
“Influences and Paralells  Andrew Peterson Diaries – V. Moberg Emigrant-novels”

The Andrew Peterson Society in Sweden has during the last years made an extended research about Andrews life concerning: The Diaries, surroundings, bookkeeping and letters. This research have resulted in that it is now easy to read Andrews diaries and bookeeping, and understand how Moberg used it when he wrote his Novel’s.
All this work can be found in the Andrew Peterson Society’s exhibition in Ydre Sweden.

It has also resulted in a book written in Swedish by Tord Ericsson about Andrew Peterson’s and F.O. Nilson’s first 10 years in the U.S.

Finaly  our Society has made a book / booklet  called:
“Andrew Peterson – The original Karl Oscar – 100 similarities”

Some of this similarities you can read below, and you can read many more if you read what is written under the 12 different headlines to the left above beginning with The People: